Once again, Hexacta hosted the AngularJS community to learn more about the implementation of two successful hybrid projects using AngularJS. 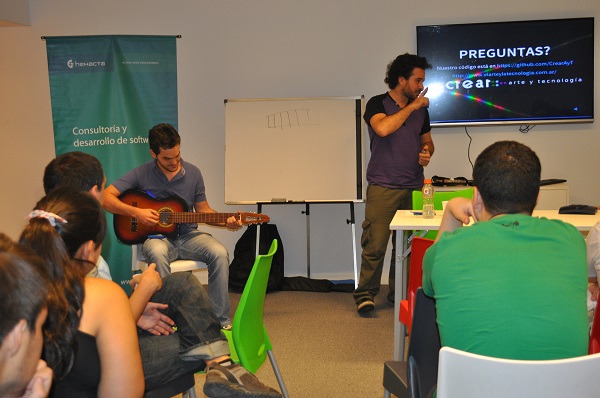 The trivia game was used in a stand in the Argentinean Science fair Tecnópolis, which used both frontend and backend technologies: Angular, Ionic Framework, Python/Django.

Guitarra Led is far more complex and sophisticated. The project aims to show the future guitar player where the different chords and scales lie on the guitar’s fretboard in a dynamic and simple way. Contrary to popular belief, it does not want to replace guitar teachers, but to complement the learning process. Students can download the songs they want to learn on the application, and the correct chords and scales with the song’s variations will light up directly on the guitar.

The AngularJS community is supported and hosted by Hexacta since 2013. Eric Delahaye organized the event, where over 35 software development professionals actively participated in the lecture with their ideas and questions. Participants were also able to try the guitar out!