In the edition of July 5, 2010, the renowned magazine Business News Americas in the Technology section wrote an article about Hexacta which refers to the software development contract for the subsidiaries of the French company Bolloré in France , Angola, Nigeria, Tanzania, Madagascar, Chad, Cameroon and Burkina Faso.

The contract which Argentine software developer Hexacta signed with French company Bolloré will be responsible for approximately 15% of Hexacta’s revenues outside Argentina this year, company partner, Fabio Gasparri told to BNamericas.

Under this project, Hexacta has deployed a web-based solution for Bolloré Africa Logistics division in France, Angola, Nigeria, Tanzania, Madagascar, Chad, Cameroon and Burkina Faso.
This solution helps the French company to control logistics operations in these markets, Gasparri said.

The project was launched one year ago and has generated revenues of approximately US$1mn. “We currently have 10 people working specifically for this project, but during peak times we had approximately 20 professionals in the project.”

The executive also said that Hexacta receives a monthly fee to provide maintenance to the solution deployed in these African countries and that there is no end date for the contract.
Founded in 1999, Hexacta has two development centers in Argentina and an office in Uruguay. 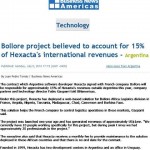